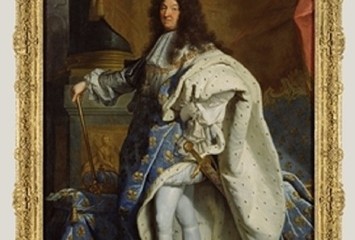 One of the first things seven-year-old Louis XIV did as France's King was to give away a set of exquisite medieval tapestries. As an adult, the Sun King wouldn't make the same mistake. During his 72-year-reign, Louis XIV amassed history's largest tapestry collection, a staggering 2,650 plus pieces. Only England's Henry VIII came close. To mark the 300th anniversary of Louis' death, fifteen of his treasures unfurl for "Woven Gold: Tapestries of Louis XIV" at the J. Paul Getty Museum in Los Angeles (December 15 through May 1, 2016). Most of the tapestries have traveled from Paris's Mobilier National, repository for 600 of the roughly 700 surviving pieces of the royal collection. Located in Paris's 13th arrondissement, the little-known institution furnishes the Élysée Palace, ministries, and embassies. Created in weaving workshops across northern Europe, the featured tapestries date from about 1540 to 1715. Eleven are making their U.S. debut; two recently underwent conservation END_OF_DOCUMENT_TOKEN_TO_BE_REPLACED 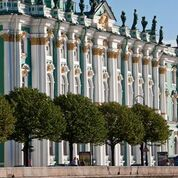 After wresting power from her husband, Catherine the Great ruled Russia for 34 years, styling herself as the heir to her westernizing grandfather-in-law Peter the Great. In parallel with military campaigns that added large parts of Poland and the Crimean Peninsula to Russia's Empire, the German-born Tsarina waged a cultural offensive, buying Western art by the boatload. The Hermitage Museum, the Winter Palace in Summer, from across the Neva River, St Petersburg Photo: Andrey Terebenin With her first acquisition in 1764 -- some 300 canvases earmarked for political rival Frederick the Great of Prussia -- Catherine II founded the State Hermitage Museum in St. Petersburg. On the heels of the museum's 250th birthday, over 450 of her art works star in "Masterpieces of the Hermitage: The Legacy of Catherine the Great" at the National Gallery of Victoria in Melbourne, Australia through November 8. Organized by Mikhail Dedinkin, deputy head of the Hermitage's department of Western END_OF_DOCUMENT_TOKEN_TO_BE_REPLACED 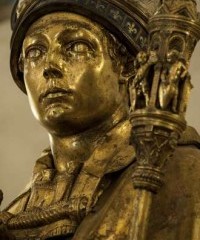 Sculpture’s key role in the Florentine Renaissance is the theme of “The Springtime of the Renaissance: Sculpture and the Arts in Florence 1400-1460” at Palazzo Strozzi in Florence through August 18 and the Louvre in Paris (September 26, 2013 to January 6, 2014). One of the show’s highlights is an early bronze by Florence’s Donatello, Saint Louis of Toulouse, which recently underwent extensive restoration. The larger-than-life statue was commissioned by the Guelph party as a tribute to the figure who renounced his claim to rule Naples to become a Franciscan. Louis died at 23 and Donatello depicts him with delicate boyish features in bishop’s regalia holding a putti-adorned crosier in his left hand and giving a blessing with his right. Enamel, rock crystal and fleurs-de-lis decorate his mitre. Donatello created the figure for the eastern wall of the church of Orsanmichele where both the sun and a classically inspired marble and gold niche added to its brilliance. But with the Guelph END_OF_DOCUMENT_TOKEN_TO_BE_REPLACED 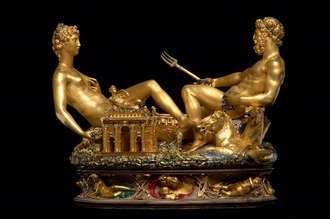 Saliera, Benvenuto Cellini, 1540-43, gold, enamel ©Wien, Kunsthistorisches Museum During the late 16th century, Holy Roman Emperor Rudolf II turned Prague into Europe’s cultural capital, amassing the greatest art collection of his day. Cost was no object and he invited the best goldsmiths, stone carvers, and clock makers to his court. Rudolf kept the treasures inside Hradcany Castle in a chamber of art, or Kunstkammer, a highly personal reflection of his world view. Today, Rudolf’s prized possessions along with those of his art-loving Habsburg relatives reside at the Kunsthistorisches Museum in Vienna. After a decade long closure, the museum’s refurbished Kunstkammer reopened March 1. Though the museum itself is lavishly decorated by famous artists including Gustav Klimt, and crowned with an ornate cupola, nothing prepares you for this 20-room embarrassment of riches. The “museum within a museum” features a dizzying 2,200 objects arranged chronologically -- from the late END_OF_DOCUMENT_TOKEN_TO_BE_REPLACED 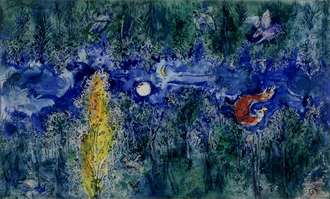 Model for the curtain "The Firebird", The Enchanted Forest, 1945, Private collection, © Archives Marc et Ida Chagall. © 2012 Artists Rights Society (ARS), New York/ADAGP, Paris In the 1950s Picasso said, “When Matisse dies, Chagall will be the only painter left who understands what color really is.” Famous for his colorful paintings of floating figures and flying animals, Russian-born artist Marc Chagall also worked in other mediums. It’s these lesser-known aspects of the artist’s practice that areexplored in “Chagall: Beyond Color” at the Dallas Museum of Art from February 17 to May 26, 2013. Costumes, ceramics, and sculptures are arranged chronologically -- from Chagall’s formative years in Russia and Paris, wartime exile in the United States, and post-war return to France. Visitors may recognize in the white marbles, terra cottas, and silk ballet costumes familiar people and animals from his much loved paintings. The eldest of nine children in a poor Hasidic family END_OF_DOCUMENT_TOKEN_TO_BE_REPLACED 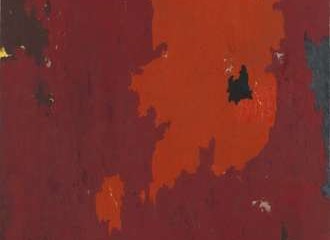 Clyfford Still, 1950 PH-272 , photo by Ben Blackwell (c) Clyfford Still Estate "You can turn the lights out. The paintings will carry their own fire,” said American Abstract-Expressionist Clyfford Still about his super-sized, flame-streaked canvases. It’s the artist’s fiery palette that’s the subject of a new show at Denver’s Clyfford Still Museum: Red/Yellow/Blue (and Black and White): Clyfford Still as Colorist from January 25 to May 12, 2013. Like much about this complex artist, the answers aren’t black and white. Over thirty of Still’s dramatic canvases are arranged in five sky-lit galleries, each devoted to one of his signature hues. Half the paintings have never been exhibited before -- part of a trove of some 800 works Still kept hidden for decades in a Maryland warehouse. The collection was finally revealed when the museum opened in 2011. For Still, black was a warm, generative color, rather than a symbol of death, and he often used it in large expanses. Though END_OF_DOCUMENT_TOKEN_TO_BE_REPLACED 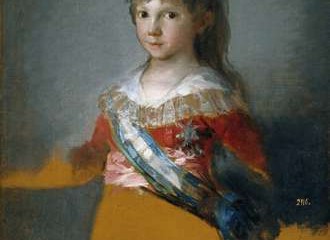 Francisco de Goya, The Infante Don Francisco de Paula Antonio, 1800, oil on canvas, Museo Nacional del Prado, Madrid. © Photographic Archive, Museo Nacional del Prado, Madrid For centuries, Spain’s monarchs avidly collected art, spending a king’s ransom to decorate their palaces and chapels with family portraits and monumental religious and mythological canvases. Their royal collections launched the Prado Museum in 1819. In a holiday gift for art lovers, 100 favorites have traveled to Houston forPortrait of Spain: Masterpieces from the Prado at the MFAH from December 16, 2012 to March 31, 2013. French writer Théophile Gautier described the Prado as "rather a museum of artists than a museum of art" and the Houston trove includes gems by giants Titian, Rubens, Velázquez, and Goya. “What surprised me most was that the Prado was willing to lend so many masterpieces to a single show,” says MFAH director Gary Tinterow. “Never before have so many works of first END_OF_DOCUMENT_TOKEN_TO_BE_REPLACED 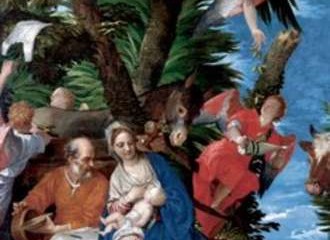 Rest on the Flight Into Egypt, Paolo Veronese, circa 1572 About the Venetian Renaissance artist Paolo Veronese, 17th century writer Marco Boschini raved: “He is the treasurer of the art and of the colors. This is not painting -- it is magic that casts a spell on people who see it produced.” Among those spellbound by Veronese’s theatrical canvases were American art collectors like Isabella Stewart Gardner, Henry Clay Frick, and circus impresario John Ringling. “Paolo Veronese: A Master and His Workshop in Renaissance Venice” unites 70 of Veronese’s finest works in North America at Ringling's Sarasota, Florida museum -- the first comprehensive U.S. survey of the artist in 25 years. The John & Mable Ringling Museum of Art organized the show with loans from many institutions, including the National Gallery of Art, Washington; National Gallery of Canada, Ottawa; Harvard Art Museums, and Cleveland Museum of Art. “It was easy for Americans to get excited about Veronese, END_OF_DOCUMENT_TOKEN_TO_BE_REPLACED 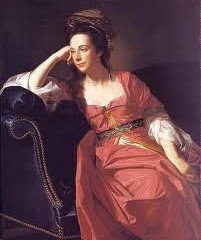 Mrs. Thomas Gage, John Singleton Copley, 1771, Timken Museum of Art “Behold, America! (and thou, ineffable guest and sister!) For thee come trooping up thy waters and thy lands; Behold! thy fields and farms, thy far-off woods and mountains, As in procession coming.” – Walt Whitman, 1871, “Song of the Exposition” Opening November 10, Behold, America! unites the best works from the American art collections of three San Diego museums: the Museum of Contemporary Art San Diego, the San Diego Museum of Art and the Timken Museum of Art. It’s a warm-up to the 100 year anniversary in 2015 of the Panama Exposition in Balboa Park, which first brought American artists of major importance to San Diego. Featuring 175 works, the ambitious show explores how American artists have reflected and helped contribute to our changing national identity over three centuries. The art works address a wide range of topics and issues -- from colonialism and racism to nature and environmentalism. END_OF_DOCUMENT_TOKEN_TO_BE_REPLACED 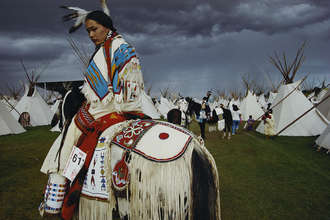 American Indian Beauty Pageant Winner, Oregon, 1997 William Albert Allard/National Geographic Stock “No matter how sophisticated you may be, a large granite mountain cannot be denied - it speaks in silence to the very core of your being.” – Ansel Adams The Buffalo Bill Historical Center in Cody, Wyoming, featured in A Love for the Beautiful, is among ten venues nationwide hosting “National Geographic Greatest Photographs of the American West” – a visual retrospective of images published by National Geographic over the past 125 years. From poignant portraits to spectacular national parks and wildlife, the 75 images present a powerful narrative about the American West. Organized thematically into four sections -- Legends, Encounters, Boundaries and Visions -- the show features historic works by early practitioners William Henry Jackson and Edward Curtis, along with modern and contemporary images by photographers like Ansel Adams, Annie Griffiths and Joel END_OF_DOCUMENT_TOKEN_TO_BE_REPLACED