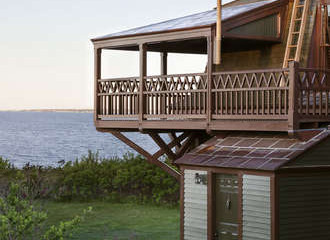 Winslow Homer Studio Piazza, photograph by Trent Bell “The picture is painted fifteen minutes after sunset – not one minute before... You can see that it took many days of careful observation to get this... with a high sea and tide just right.” -- Winslow Homer Of all his works, Winslow Homer is best remembered for a series of powerful “marines.” His inspiration? Prouts Neck, Maine, where he lived and worked for over a quarter of a century. Now Homer fans can visit his studio -- thanks to a major restoration by the Portland Museum of Art. “This studio is particularly relevant because Homer’s art was so transformed by moving into the studio in Maine,” says PMA director Mark Bessire. “Like Monet at Giverny, Homer at Prouts Neck, Maine became a different artist. And it was wonderful to acquire the studio directly from the Homer family as the very patina of the building reflects their caring legacy.” The Boston-born artist discovered coastal Maine when his END_OF_DOCUMENT_TOKEN_TO_BE_REPLACED