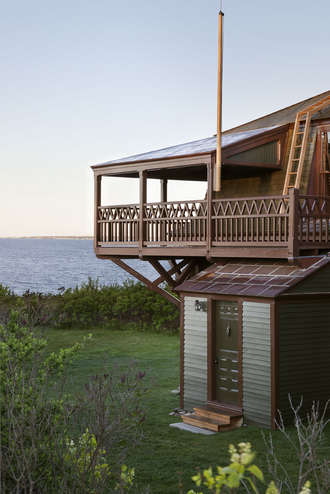 “The picture is painted fifteen minutes after sunset – not one minute before… You can see that it took many days of careful observation to get this… with a high sea and tide just right.” — Winslow Homer

Of all his works, Winslow Homer is best remembered for a series of powerful “marines.” His inspiration? Prouts Neck, Maine, where he lived and worked for over a quarter of a century. Now Homer fans can visit his studio — thanks to a major restoration by the Portland Museum of Art.

“This studio is particularly relevant because Homer’s art was so transformed by moving into the studio in Maine,” says PMA director Mark Bessire. “Like Monet at Giverny, Homer at Prouts Neck, Maine became a different artist. And it was wonderful to acquire the studio directly from the Homer family as the very patina of the building reflects their caring legacy.”

Over time, Homer developed a deep connection to place. “Homer’s commitment to lived experience and place is profound,” says Thomas Denenberg, director of the Shelburne Museum and PMA’s former chief curator. “The fact that he chose to eschew the social and physical comforts of his New York studio and re-locate to the inhospitable coast of Maine led directly to a shift in his work that presaged modernist explorations of weather and nature in the twentieth century.”

The two and a half hour guided tour departs from PMA in fall and spring — an experience Mark Bessire describes as “intimate” and a “pilgrimage.” Family photos and fishing poles decorate Homer’s parlor with its original bead board paneling and tongue and groove wood floor. Antlers hang over the fireplace where Homer cooked, along with a sign he used to scare unwanted visitors: “Snakes, Snakes and Mice.”

In the upstairs “factory” room where Homer finished his large paintings are his leather and canvas watercolor paint box and recognizable props like an oil skin hat, ship wheel and sextant. In preparation for his canvases, Homer studied the sea from the upstairs wraparound porch. Visitors can now experience the same crashing waves, salty sea air, and soaring gulls.

Homer’s presence is felt throughout the two-story, dark green building — especially by the windows that framed his view of Prouts Neck. “To regard High Cliff to the east and the Atlantic waves to the South is to be transported into Homer’s worldview,” adds Denenberg.

Long after family and friends left Prouts Neck, Homer and his dog Sam stayed through fall and often until Christmas — or until his water bucket froze. It’s easy to imagine the artist etching “Winslow” on the upstairs window pane. “All is lovely outside my house and inside my house and myself,” Homer wrote two years before his death here in 1910.

To celebrate the studio’s opening, PMA has reunited three dozen Prouts Neck paintings, watercolors and etchings for “Weatherbeaten: Winslow Homer and Maine” (through December 30, 2012). Among the highlights are Eight Bells from the Addison Gallery of American Art and Weatherbeatenfrom PMA. For more information and studio tour tickets, visit www.portlandmuseum.org, 207-775-6148.