Warning: Use of undefined constant is_home - assumed 'is_home' (this will throw an Error in a future version of PHP) in /home/customer/www/susanjaques.com/public_html/wp-content/themes/caroline/functions.php on line 310 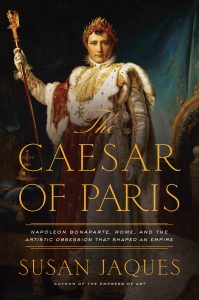 The Caesar of Paris

A monumental cultural history of Napoleon Bonaparte’s fascination with antiquity and how it shaped Paris’ artistic landscape.

Napoleon is one of history’s most fascinating figures. But his complex relationship with Rome—both with antiquity and his contemporary conflicts with the Pope and Holy See—have undergone little examination.

In The Caesar of Paris, Susan Jaques reveals how Napoleon’s dueling fascination and rivalry informed his effort to turn Paris into “the new Rome”— Europe’s cultural capital—through architectural and artistic commissions around the city. His initiatives and his aggressive pursuit of antiquities and classical treasures from Italy gave Paris much of the classical beauty we know and adore today.

Napoleon had a tradition of appropriating from past military greats to legitimize his regime—Alexander the Great during his invasion of Egypt, Charlemagne during his coronation as emperor, even Frederick the Great when he occupied Berlin. But it was ancient Rome and the Caesars that held the most artistic and political influence and would remain his lodestars. Whether it was the Arc de Triomphe, the Venus de Medici in the Louvre, or the gorgeous works of Antonio Canova, Susan Jaques brings Napoleon to life as never before.

Praise for The Caesar of Paris

“Jaques presents France’s Napoleon Bonaparte as an heir to the emperors of ancient Rome in her new book. She vividly and effectively brings alive Napoleon’s deliberate attempt to position himself as a new Roman Princeps, surrounded in France’s capital city by recreations of ancient Rome’s most iconic arches and columns.” —Diana E. E. Kleiner, Dunham Professor of History of Art & Classics, Yale University, author of Cleopatra and Rome

“Showing the pivotal role that ancient Rome played in shaping the mythic image of Napoleon as ‘master of France,’ Susan Jaques weaves an engaging and accessible story about how Napoleon’s visions of military glory, cultural conquest, and artistic achievement shaped Paris during the Empire period.” — Iris Moon, author of The Architecture of Percier and Fontaine

“In this excellent history, Susan Jaques traces the cultural elements of the rule of Napoleon Bonaparte, whose imperial style in everything from national rituals to coinage was largely modeled after that of ancient Rome. Jaques focuses on architecture, monuments, and the graphic and decorative arts, but also looks at political rituals, military organization and holidays…Jaques’s rich work of scholarship will delight lovers of art and Napoleon aficionados, as it sheds much new light on a previously underexplored dimension of the French emperor.  —  Publisher’s Weekly 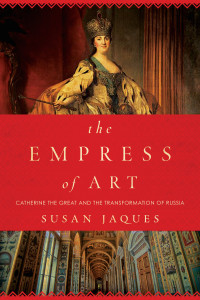 Ruthless and passionate, Catherine the Great is singularly responsible for amassing one of the most awe-inspiring collections of art in the world and turning St. Petersburg in to a world wonder.  The Empress of Art brings to life the creation of this captivating woman’s greatest legacy.
An art-oriented biography of the mighty Catherine the Great, who rose from seemingly innocuous beginnings to become one of the most powerful people in the world. A German princess who married a decadent and lazy Russian prince, Catherine mobilized support amongst the Russian nobles, playing off of her husband’s increasing corruption and abuse of power. She then staged a coup that ended with him being strangled with his own scarf in the halls of the palace, and she being crowned the Empress of Russia.

Intelligent and determined, Catherine modeled herself off of her grandfather in-law, Peter the Great, and sought to further modernize and westernize Russia. She believed that the best way to do this was through a ravenous acquisition of art, which Catherine often used as a form of diplomacy with other powers throughout Europe. She was a self-proclaimed “glutton for art” and she would be responsible for the creation of the Hermitage, one of the largest museums in the world, second only to the Louvre. Catherine also spearheaded the further expansion of St. Petersburg, and the magnificent architectural wonder the city became is largely her doing. There are few women in history more fascinating than Catherine the Great, and for the first time, Susan Jaques brings her to life through the prism of art.

Praise for The Empress of Art:

Catherine the Great and the Transformation of Russia

“Catherine the Great collected art with the same passionate intensity she showed for lovers, foreign conquest, and power. Exhaustively researched and written with great style, The Empress of Art tells the fascinating story of Catherine’s love affair with the arts and how she used them to advance the glory of Russia and her reign. A marvelous book.”
—Douglas Smith, author of Former People: The Final Days of the Russian Aristocracy.
***
“The author provides a unique perspective on the woman who “transformed Russia from a northern backwater to global superpower.” An intriguing biography of a ruler whose ruthlessness encompassed art.”    —Kirkus Reviews
***
“A page turner… this insightful and rich book, by Susan Jaques, chronicles Catherine the Great’s extraordinarily ambitious patronage of the arts.”   —Antoine Cheneviere, author of Russian Furniture: The Golden Age 1780-1840
***
“Jaques focuses on how Catherine’s prolific art acquisitions transformed Russia into a worldwide cultural powerhouse. As a form of statecraft, Catherine’s collecting conveyed authority and sophistication, making her and Russia a force to be reckoned with among nations…Jaques’s detailed description of Catherine’s passion for art stands on its own as a vivid portrayal of a fascinating ruler…”  —Library Journal
***
“Jaques portrays Catherine II of Russia, founder of the Hermitage Museum, as a shrewd investor in this considerate biography of the art-obsessed monarch.  The ambitious, German-born empress remains a rich source of material.  The Hermitage marked its 250th anniversary in 2014, and as Jaques shows, it stands as a fitting testimonial to its visionary founder.”  —Publishers Weekly

Available in Hardcover, Paperback and e-copy from a variety of retailers. See direct links below.