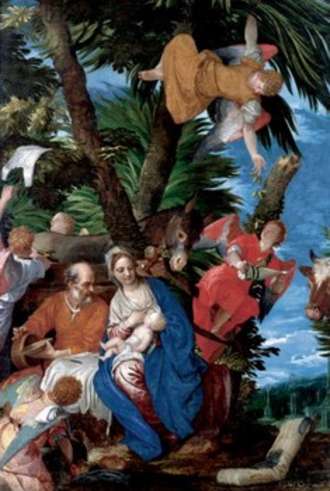 Rest on the Flight Into Egypt, Paolo Veronese, circa 1572

About the Venetian Renaissance artist Paolo Veronese, 17th century writer Marco Boschini raved: “He is the treasurer of the art and of the colors. This is not painting — it is magic that casts a spell on people who see it produced.” Among those spellbound by Veronese’s theatrical canvases were American art collectors like Isabella Stewart Gardner, Henry Clay Frick, and circus impresario John Ringling.

“Paolo Veronese: A Master and His Workshop in Renaissance Venice” unites 70 of Veronese’s finest works in North America at Ringling’s Sarasota, Florida museum — the first comprehensive U.S. survey of the artist in 25 years. The John & Mable Ringling Museum of Art organized the show with loans from many institutions, including the National Gallery of Art, Washington; National Gallery of Canada, Ottawa; Harvard Art Museums, and Cleveland Museum of Art.

“It was easy for Americans to get excited about Veronese, who Henry James called “the happiest of painters”” says Virginia Brilliant, the Ringling’s associate curator of European art. “Set in beautiful landscapes, with gorgeous fabric and a degree of wonder and color, his works were not overtly religious. And Venice was a Republic — not out of step with democratic values.”

A portion of the exhibition is dedicated to Veronese’s monumental allegorical, mythological, and biblical subjects. Among the highlights is Rest on the Flight Into Egypt, a large, lushly painted altarpiece John Ringling bought sight-unseen for his fledgling museum in 1925. It was one of several popular biblical themes Veronese returned to throughout his career.

One of the big three Venetian painters with Titian and Tintoretto, Veronese is celebrated for his palette — inspiring artists from Rubens to the Impressionists. Sumptuous dresses and draperies also figure prominently in his opulent portraits of aristocratic families and clerics. The show explores the symbolic value of Renaissance costume with 16th century textiles from the Museum of Fine Arts, Boston.

Viewers are also introduced to Veronese’s workshop assistants, including his brother, Benedetto Caliari, and sons, Carlo and Gabriele. By the 1580s, the workshop was so busy Veronese turned down a commission from Philip II of Spain.

Considered among the most talented and prolific draftsmen of his day, Veronese produced drawings for most of his commissions. Remarkable works on paper – everything from loose preliminary sketches to highly finished chiaroscuro sheets — offer a deeper understanding of Veronese’s creative process.

For John Ringling, the son of immigrant parents from Iowa, Veronese personified Venice, the city he fell in love with during frequent trips to Europe in search of circus acts. In a six-year collecting frenzy, Ringling bought an extraordinary number of Venetian pictures — including two more by Veronese, one painting he thought was a Titian, and a dozen works by Jacopo Bassano, known for his use of impasto.

Today Ca’ d’Zan, the couple’s restored 56 room seaside mansion, is open to the public, filled with their eclectic collection of European decorative arts. “Paolo Veronese: A Master and His Workshop in Renaissance Venice” runs from December 7, 2012 to April 14, 2013. For more information, visit www.ringling.org